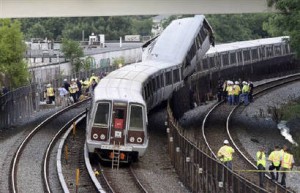 Transit authorities in Washington, D.C., had been warned to upgrade older subway cars before a crash on Monday that killed nine people, U.S. investigators said on Tuesday.

Federal officials investigating the crash, the deadliest in the 33-year history of Washington’s Metro Area Transit Authority, said a 2006 warning to retire or modernize older subway cars like those involved in the crash went unheeded.

“We recommended to WMATA to either retrofit those cars or phase them out of the fleet. They have not been able to do that and our recommendation was not addressed,” National Transportation Safety Board spokeswoman Debbie Hersman said at a news conference at the scene of the accident.

Seventy-six people were taken to hospitals after one train slammed into another that was stopped on above-ground tracks during the afternoon rush hour, Washington Mayor Adrian Fenty said.

A Metro news release later said the figure rose to nine after more bodies were pulled from the wreckage.

The operator of the moving train was among those killed in the crash, which drove one train on top of the other. It remained there on Tuesday morning as workers attempted to clear the wreckage.

Metro said it could take weeks or even months before the cause of the crash was determined.

The NTSB, a federal agency, had urged the Metro system to replace older subway cars or upgrade their crashworthiness following a 2004 accident that injured 20 passengers, federal records show.

Metro general manager John Catoe said changes to the rail cars would be made if needed.

“Any car that strikes another vehicle at a certain rate of speed and with a certain amount of weight, you’re going to have some major damage,” he said.

Metro spokesperson Lisa Farbstein said the car which struck the waiting train was among the oldest on the system and had been in service since Metro opened in 1976.

She added that about 290 of Metro’s 1,126 cars were original, and that Metro officials were in the process of soliciting bids for replacements — although cost was an issue.

“We don’t have the money in place to replace them,” she said. “We believe that they are safe to have on the rails.”

The crash occurred on the heavily traveled Red Line about 5 p.m. EDT (2100 GMT) on a relatively lengthy stretch of track near the city’s northeastern border with Maryland, where trains can build up a considerable speed.

Both trains were heading south into the city. The leading train had stopped because it was waiting for another to leave the Fort Totten station, officials said.

It was unclear why the second train had not received the stop signal as well, or why the operator did not manually stop her train when she saw the blocked tracks ahead, officials said.

Passengers on the second train said it did not slow down at all before impact.

“There was no attempt at braking. We just slammed into whatever we slammed into,” passenger Theroza Doshi told Reuters.

Washington’s Metro system needs more than $7 billion to keep its fleet of trains and buses in good repair through 2020, Catoe told Congress in recent testimony.

It also needs to replace one-third of its rail cars, some of which are more than 30 years old.

The U.S. recession has caused the system to cut its operating budgets this fiscal year by 10 percent.

Last month, it had to tap reserves to help close a funding gap for fiscal year 2010 that at one point was projected to reach $154 million. Despite the problems, rating agency Standard & Poors in April raised the system’s credit rating.